Some of the most important changes in the CIT Act are summarized below.

1. Changes to the Method of Calculating the Corporate Income Tax Advance Instalments

The new rules could be summarized as follows:

Further, the CIT advance instalments will be calculated based on the forecast tax profits for the current tax year.

(i) Exemption from Obligation to Make Advance Instalments

Nevertheless, the taxable persons may chose at their discretion to make quarterly advance instalments under the general rules. In this case, however, no default interest will be levied if the annual CIT exceeds the advance instalments.

The most important provisions concerning the new rules for determining and payment of the monthly and quarterly advance instalments are summarized in the table below: 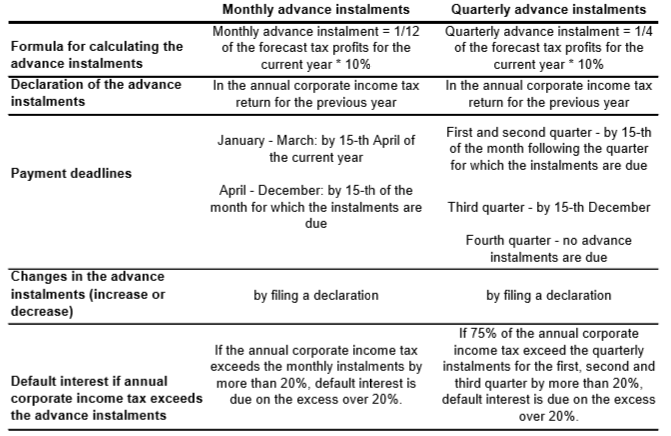 The monthly and quarterly CIT advance instalments for 2013 must be declared by the taxable persons in their annual CIT returns for 2012.

On a separate note we should also mention that tax losses will no longer be deducted when determining the quarterly advance instalments.

2. Transformation of the Tax on Expenses into an Annual Tax

Following the changes the tax on expenses, which is currently due on a monthly basis, will be transformed into an annual tax.

(i) Time Limits for Payment of the Tax

The time limits for payment of withholding tax (WHT) have been changed.

So far the time limits ran from the beginning of the month following the month when the income was accrued and their duration depended on whether the beneficiary of the income was a tax resident in a state which is party to a Convention for the avoidance of the double taxation concluded with Bulgaria.