CHANGES TO THE SOCIAL SECURITY TAXATION AND LEGISLATION

Some of the most important changes in the social security taxation and legislation are summarized below.

In 2013 the social security and health insurance contributions rates will remain unchanged. The rates are summarized in the tables below: 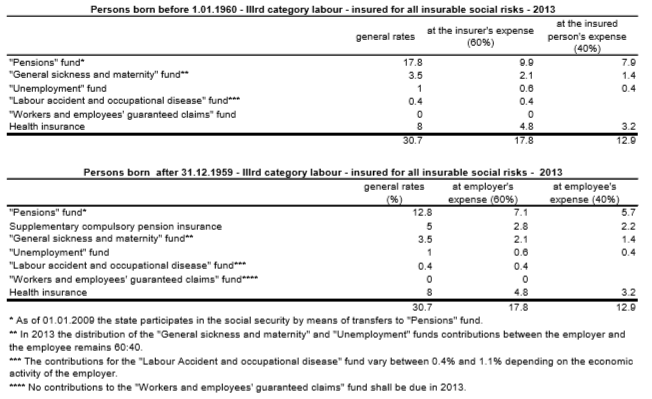 In 2013 the maximum income on which social security and heath insurance contributions shall be payable is increased from BGN 2000 to BGN 2200.

The minimum social security thresholds for the persons employed under labour contracts and engaged in a number of business activities will also rise.

This Tax Alert has been prepared by DELCHEV & PARTNERS for information purposes only and does not constitute legal advice. This information is not intended to create, and receipt of it does not constitute, an attorney-client relationship. Readers should not act upon this without seeking professional counsel.

The minimum monthly social security income for self-employed persons remains the same varying between BGN 420 and BGN 550 depending on the taxable income of the persons for 2011. Self-employed persons who did not carry out any business activity in 2011 or who started business in 2012 or 2013 would need to pay social security and health insurance contribution on a minimum monthly income of BGN 420