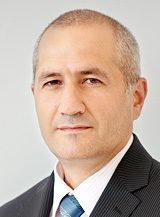 Emil Delchev headed the legal and tax department of Ernst and Young (Sofia) from 1995 until 1998. From 1998 to 2002 Emil Delchev was contracted to be in charge of the legal and tax department of Arthur Andersen (Sofia). Upon the demise of Andersen in 2002 and following a merger between Ernst & Young and Andersen in Bulgaria Emil Delchev headed the tax service line of Ernst & Young (Sofia) until February 2005 when he founded Delchev and Partners.

Emil Delchev brings the most valuable experience in practically all areas of law and taxation. Emil Delchev has guided hundreds of foreign investors in establishing their businesses in Bulgarian in times when Bulgaria changed from state to market economy. He has been involved from both legal and tax perspective in privatizations, restructurings, M&As, due diligence processes, acquisitions. Emil Delchev has provided advice in relation to some of the biggest and most complex transactions in Bulgaria.